Come back and read this later. :)

I've got some love for a middle grade book today. It's cute. It's clever. And even though the protagonists are two little girls, it's a book that defies the gender gap. 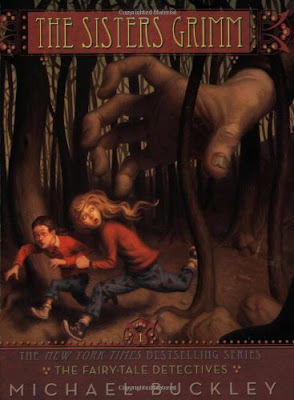 For Sabrina and Daphne Grimm, life has not been a fairy tale. After the mysterious disappearance of their parents, the sisters are sent to live with their grandmother--a woman they believed was dead! Granny Relda reveals that the girls have two famous ancestors, the Brothers Grimm, whose classic book of fairy tales is actually a collection of case files of magical mischief. Now the girls must take on the family responsibility of being fairy tale detectives.

The good news? There's even more of this book to love! I'm counting EIGHT Sisters Grimm books on goodreads (and when we finish reading those, there's a fun book also by Michael Buckley called N.E.R.D.S. that looks like it's right up my--er, my sons' alley).

I'm the mother of two little boys, so maybe it seems odd that I'm all excited about a series written about girl detectives. And I'll admit, when I started reading this book to my almost 4-year-old before nap time, I thought it would be something mainly for me to enjoy as his little head lulled off to sleep. But each page was filled with action and attitude, which boys and girls love just the same. It took him much longer than usual to fall asleep because he was engaged in the story (not that I'm complaining).

Michael Buckley did an excellent job characterizing Sabrina, the older sister, as a brave, distrusting soul who always has their next home cased for escape, should the need arise. She's the perfect body guard for little sister, Daphne, who thinks Great Danes are adorable, and green meatballs are exciting! Together, they navigate a strange new world where everything they read in fairy tales is true... more or less. Daphne's more at home in this world than Sabrina, with her childlike faith and forgiving nature. Ironically, it's Sabrina--normally suspicious of everyone--whose sudden bout of trust gets them double-crossed. And since there's more than one trickster in the story, you'll have a fun time trying to figure out who the double-crosser will be!

With action, humor, and a touching dose of realism in the relationship between the girls and their missing parents, The Fairy Tale Detectives won my heart.

How about you? Read any great middle grade lately?
Brilliance by Katrina L. Lantz at 8:45 AM