Today it's my pleasure to welcome Christine Fonseca to my blog!!
You may know Christine from her very cool non-fiction about gifted children, but if not, then here is a real treat, because you get to meet her at the start of her YA debut! Dies Irae! 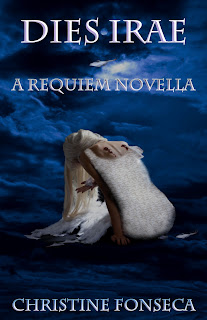 Some sacrifices should never be made—even for love.
Mikayel lives by one rule—obey the orders of the angelic Council at all
costs. But when he and his friends, Azza and Demi, are sent to Earth as
teenagers, following the rules is more difficult than they expected.
Being human isn’t the only problem facing the three angels. Unbeknownst
to the Council, demonic activity is on the rise, threatening to break a
tenuous peace that has existed for a millennia.
Caught in a struggle for power with unseen demonic forces, and fighting
against his rising emotional, Mikayel must now decide how many rules he
is willing to break to save his friends, a decision that could reignite an
ancient war and will threaten the only thing that matters to the angels, the
survival of humanity.

“Dies Irae is the perfect introduction to Christine Fonseca’s Requiem series. The beauty of the words will tempt you, the tragedy of the story will break you, and the love, woven throughout like music through the trees, will haunt you for days afterward. Dies Irae promises a tale unlike any you’ve read before.”
~Ali Cross, Author of BECOME
School psychologist by day, critically acclaimed YA and nonfiction
author by night, Christine Fonseca believes that writing is a great
way to explore humanity. Her debut YA Gothic series, The Requiem
Series, including DIES IRAE and LACRIMOSA, examines the role
of redemption, sacrifice and love. When she’s not writing or spending
time with her family, she can be sipping too many skinny vanilla lattes
at her favorite coffee house or playing around on Facebook and
Twitter. Catch her daily thoughts about writing and life on her blog.
Now, here's Christine...
My Type of Writing: Understanding Gothic and Thriller Subgenres
Thanks, Katrina, for being part of the blog tour for DIES IRAE. Today I want to talk about the types of stories I like to write—namely Gothic stories and thrillers.
We’ll start with Gothic stories. While DIES IRAE is not strictly a Gothic story, it does have several elements of this subgenre. Typically a Gothic novel has the following features:
·         Setting: Typically a Gothic tale takes place in an old castle of house, full of gloomy shadows, long dark hallways, trap doors, etc. In more modern takes, a Gothic tale may take place in a rundown part of a city.
·         Mood/Tone: An atmosphere of suspense and mystery overrides every aspect of a Gothic tale. Typically, the setting itself is used to portray and enhance the tone.
·         Story: Gothic novels usually include an ancient prophesy of some type, omens and nightmares, women in distress of one form or another, and mystery.
·         Characteristics: A Gothic tale has supernatural occurrences in the story and usually pulls on mythology and Jungian archetypes.
·         Language: The rhythm of the writing is somewhat fluid and lyrical. The emotional content is intense and overwrought throughout the majority of the story.
·         Romance: Yes, there is often a romance, usually involving a woman trying to get away from a tyrannical male, and the hero meant to save her.
The Requiem Series fits nicely within these guidelines, tapping into almost all of them.
The other genre I enjoy writing, is thrillers. Specifically psychological thrillers. Similar to the Gothic story elements listed above, thrillers are dark, spine-tingling stories. A few of the common characteristics include:
·         Setting: Since I write psychological thrillers, I fill focus on the mind, using it as the setting for the story in many ways. I may even make it a character of sorts.
·         Mood/Tone: Varies, but it is typically dark. Foreboding. And can be done through a series of literary devices designed to elicit the emotional response of fear.
·         Story: A thriller typically focuses on WHO committed the terrible act, or HOW it was committed. The pacing is typically fast and furious, all designed to keep the reader at the edge of their seat.
·         Characteristics: These are not your overarching moral-tale kind of stories. Thrillers are all about one thing—eliciting a feeling of fear from the reader.
·         Language: Simple and quick, designed to mirror the pacing. It may be fluid and lyrical, but the variance of sentences will still maintain the pacing.
·         Romance: I use romance, albeit a dysfunctional romance, in my thrillers as a motivating factor for the crimes being committed. I find love the best emotion to elicit a response, you know?!?
As you can see, there is a lot in common between these sub-genres, and indeed, I fluctuate between them often, pulling elements of each into every story I write. I don’t know, I just like writing the somewhat creepy stuff. I hope my readers will like it too!
Thank you, Christine!! I love this insight into writing psychological thrillers! What an exciting genre!
Here's a peek at the beautiful Lacrimosa cover: 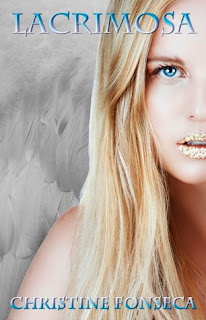 As if casting out demons isn’t hard enough, five-hundred-year-old Nesy has to masquerade as a teenage girl to do it. Nesy is the best of the warrior angels called Sentinals. She never makes mistakes, never hesitates, never gets emotionally involved. Until she meets Aydan.  He is evil incarnate; a fallen angel that feeds off the souls of others. Everything Nesy is supposed to hate.  But she can’t, because he’s also the love of her former life as a human girl—a life that ended too soon, tying her to emotions she was never supposed to feel.
Now Nesy must choose between doing her duty—damning Aydan to the fiery depths of hell—or saving him, and condemning herself.

"LACRIMOSA reaches out, grabs readers by the heart, and takes them on an emotional journey from the first page to the last. The last novel you'll need to read to understand true sacrifice." - Elana Johnson, Author of POSSESSION
Additional Titles in the series include LIBERA ME (Nov 2012) and REQUIEM (March 2013).
BOOK TRAILER!!!
For more information about Christine Fonseca or the series, visit her website – http://christinefonseca.com or her blog http://christinefonseca.blogspot.com.
Brilliance by Katrina L. Lantz at 8:06 AM 0 comments