Matt began our topic this round:

What is your all-time favorite monster?

If we go by monster types, I'd have to go with fairies. 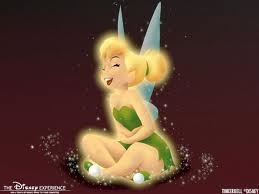 They're definitely monsters, but really beautiful, manipulative monsters who pretty successfully hide their true nature. But then they make you dance until your feet fall off and you know for sure. But by then it's too late. Buwahahaha!

My favorite individual monster is without a doubt JAMES P. SULLIVAN. 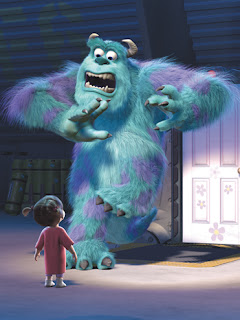 I don't know any other monster with a full name like this, or an awesome nickname like Sully. He's scary when you want him to be and cuddly when you need a pillow. What more could you want in a monster?

Thanks to Matt for the fun question! And Happy Halloween, everybody!

Check out Kate, whose tribute to a certain muppet can't help but make you smile. And tomorrow we'll hear from Michelle H.
Brilliance by Katrina L. Lantz at 7:19 AM 13 comments

Just what I didn't know I needed 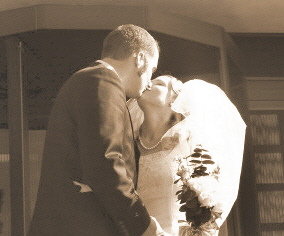 I'm at Operation Awesome today talking about the things only a writer's spouse/best friend can understand, the hidden meanings behind the words we say about our writing. It's definitely a special relationship when you find someone who understands and supports your writing.

In fact, it was probably one of those deal-breakers for me, even though I didn't know it when I first met my husband. I wasn't actively writing at all. He read some of my journals, something we shared when we were getting to know each other. He said I had a unique way to write (voice), and he felt like he was reading a story. After that, he encouraged me to write, told me he believed I could get published. Sometimes I wonder if he regrets that encouragement just a little bit now. ;) But he still offers encouraging words, six years later, when I feel like I want to give up on my writing goals.

Like I said, I didn't know at the time how important it was for me to marry someone who supported my desire to write. The magic is that Bill encouraged it even when it wasn't something I was actively pursuing, wasn't something I wore on my sleeve. He reached into my soul, saw a writer there, and coaxed her out.

When our kids get to dating age, my advice to them will be this: find people who care enough to see your talents even when you're not showing them off. And find people who encourage you to go all-in, follow your dreams, and do what makes you happy.

Being married to any kind of artist has to be a challenge, but I'm grateful to my husband for taking a chance on me and investing so much of his love (and patience) to help me grow into a better version of myself. I hope I can reciprocate that at every turn, help him live out his dreams, too. Even if we never get our loftiest dreams, I know the journey has already been well worth it.

Happy Writing, everyone!
Brilliance by Katrina L. Lantz at 8:27 AM 6 comments

Blog Chain: All the Help I Can Get 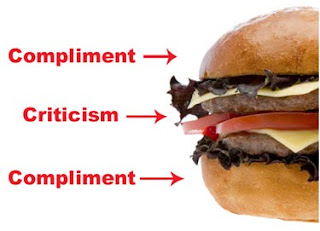 Do you work with critique partners? How did you find your crit pals, and what influence have they had on your work?

Which is a great question. I've blogged about my critique partners before and how I met them. In fact, when I did a search for keyword "critique" all of these came up:
The Joy of Community
WIP it good: Share your reading and writing adventures
You want me to change WHAT?
More Gushing About Operation Awesome
Would you keep going? (if you were the only writer in the world)
The Perks of Fellowship for Novelists
Celebrate Michelle, Operation Awesome's Newest Member!
Writing Enablers: Who's Enabling You?
As you can see, my critique group is pretty important to my writing process. Both they and the online writing community are a big reason I don't just give up writing when life gets busy or the craft gets difficult.
I had just written my fourth novel when I met Amparo in absolute-write forums. Agent Mandy Hubbard had held a query critique workshop thingy (technical term) and liked my query enough to request pages, even though mine was an MG boy book and you can see from the pink on her website that it's not her usual thing. To polish up my work, I requested help on absolute-write and a few people responded. Amparo was the one who got back to me a) the fastest and b) with the most helpful, thorough feedback. Not only did she point out when something didn't make sense. She also put in her funny little comments, like "Grr!" when somebody was mean to my protag or "LOL" when something made her giggle. After that, I was hooked on exactly her kind of feedback.
But I didn't really know what it was like to be a critique partner. It wasn't, at the time, a reciprocal deal. Separately, I posted about a partial request I'd gotten on the same book (my so-close-but-not-quite-competitive-for-the-market book) on the query tracker forum. Kristal saw me there and was interested in forming a critique group, one that hopefully wouldn't fizzle out like the last one she'd been in. I didn't respond right away. Like I said, I didn't know what it was to be a critique partner. It sounded like a big deal.
But eventually, I did write her back and we started the work of forming the group. She invited two people (Kelly and Angela) and I invited the one person I knew (Amparo) who invited someone else (Lindsay). We emailed about a group name and came up with Operation Awesome... which I have to confess I thought was a really silly name at the time. Now I can't imagine it any differently.
When one member got too busy to do the critique end of things, we sifted through a few people's pages to sort of try out different writers, see if they fit with our group. That's how I met Michelle, and also how I ended up part of this blog chain. Without Michelle, I'd have forgotten to do Blog Chain completely! Thanks, Michelle!
Each member of Operation Awesome brings something unique, whether it's an eye for grammar and punctuation, an understanding of what makes literature feel realistic, an affinity for beautiful descriptions, or an ear for authentic teen voice. Sometimes it's tricky having five people's work to critique, especially because we are typical writers, switching up projects like we change clothes. But I can't imagine who I'd do without. I hope we'll be together for a long time.
How did you find your critique partners?
Make sure you also read Cole's post before mine and Michelle H.'s tomorrow.
Brilliance by Katrina L. Lantz at 8:51 PM 12 comments 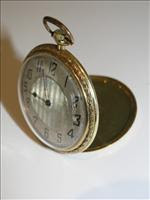 I can't believe it's been a week since I last posted. Well, the good news is that I have been writing. And outlining.

Since outlining is such mind-numbing work at times, I decided to let myself write 8-10 pages of any Shiny New Idea that comes my way. This might waste a couple hours a week, but it keeps my writing muscles primed without being a complete distraction from the real work of re-outlining a failed project. It's a project I'm just unwilling to let go.

I was encouraged by the dedication in the front of The Maze Runner, which is by anyone standards an amazing book.


For Lynette. This book was a three-year journey, and you never doubted.

Wow. I get so caught up at times in the stories of fast writers making it big in record time, that I forget how many incredible works took years to create. It doesn't make me think less of James Dashner to know The Maze Runner was a three-year journey for him. It makes complete sense, given the complexity and consistent mystery through to the very end.

I realized after reading that dedication that my book idea is no less complex. It's a whole other world I'm meshing with our world, and I need to give myself time to flesh that all out, to explore every bit of it, and to craft an introduction that is both compelling and mysterious.

That's a tall order for six months, or even the 10 months I spent writing the first draft. It's been sitting long enough now, so I really feel it's time for a new look at it.

I've got other projects almost done and some just beginning, but I keep coming back to this one. Like I said, I'm not ready to let it go. Maybe someday there'll be a good reason for that. For now, I'll just keep working and hope for the best.

What's keeping you busy these days? Have you ever spent more than a year on one writing project?


p.s. I'm at Operation Awesome today talking about trends and the universal psyche we can't escape.
Brilliance by Katrina L. Lantz at 9:53 AM 5 comments

Links to this post
Email ThisBlogThis!Share to TwitterShare to FacebookShare to Pinterest
Labels: James Dashner, The Maze Runner, writing time 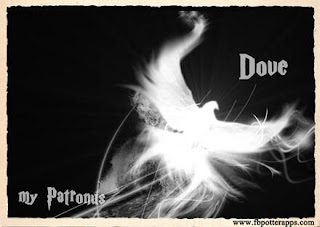 October's Mystery Agent and her winners are now up at Operation Awesome.

What are you waiting around here for? Go check it out! ;)

Seriously, what are you waiting for? Oh, you want me to leave first. Okay, then.