After six years of sitting on this manuscript, I've decided--with plenty of encouragement from those closest to me--to self-publish DRATS, FOILED AGAIN! and let it find its readers!!

The book and I are really excited about this.

So yesterday I sat down with some paintbrushes and a lot of yellow and green paint, and made my own cover art. Right now, I have some dear friends and family reviewing the latest revisions of the manuscript for readability and consistency. Early next month, I'm having a freelance editor copyedit it, and we have a tentative release date of April 20, 2018!! This has been a long time in coming.

Without further ado, I give you the cover art for DRATS, FOILED AGAIN! 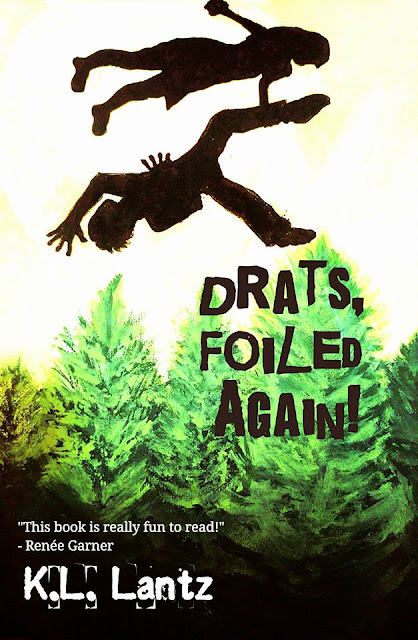 Robert Gilbrinkle is blind in one eye, which makes dodging punches in his Anti-Hero Maneuvers class especially difficult, but his lack of depth perception is the least of his troubles. Nox Academy’s senior project deadline is fast approaching, he's failing three classes, and, naturally, his evil twin Rupert keeps trying to kill him every chance he gets.

But the real trouble begins when Robert’s pathetic superpower--a very unwicked superwink that fixes anything broken--starts to evolve. The kids at Nox used to laugh and call him "Rob Repairman" but nobody is laughing now. His wink threatens anyone who threatens him.

Robert has always known where he stands - on the other side of the hall from Rupert. What haunts him the most is the revelation that maybe he and Rupert aren't as different as he thought. Battling a common enemy brings them closer than either twin can handle, but the lives of their friends are at stake and the thirst for revenge is strong. Maybe even stronger than their disdain for each other.
With the playful cartoonish style and broad crossover appeal of Disney’s SKY HIGH, and the coming of age heroic drama of Matthew Cody’s POWERLESS, Robert’s story will resonate with kids from 8 to 14 who love to escape to that comic book world of good vs. evil and often wonder where in the midst of that universe they fit in.

What was the clincher? And why six years later? Well, here's the exciting and perilous story behind the non-publishing and eventual self-publishing of DRATS, FOILED AGAIN!

First, the reason I finally decided, the CLINCHER for my self-publishing decision, was my eight-year-old son, Layne James. Oh, he's adorable, and he loves comic books more than life itself. He is often found with a stack of white paper and a pen, drafting his own hero-vs.-villain stories. I wrote DRATS, FOILED AGAIN! when he was only two years old, and his big brother was five. I had always intended to share it with them, but they were a little young for a readaloud this thick at the time. Trust me, I tried reading WHERE THE RED FERN GROWS with Sam, the big brother, and all it did was put him to sleep (which is in itself its own kind of win!). But somehow it came up this year and I started reading it with Layne James. That fun bonding experience led me to pick up the old manuscript and finally see what it needed. The rest is history, and here's that story for those who desperately want to know:

DRATS, FOILED AGAIN! got the most attention from literary agents, out of all of my work. One agent optimistically referred me to another agent she thought might really dig it, and the feedback was flatteringly positive, except for one thing: THEY DIDN'T KNOW WHERE IT FIT IN THE MARKET. I was advised to rewrite the whole story to make it so the characters weren't in high school, but in some sort of junior academy for villains instead. And I did!

It was painful to go through and make the changes, and at the end, the story felt like an empty shell of its former self. I couldn't understand why changing the age made such a difference until I thought a good, long while about it. The answer was obvious, and I don't know why I didn't see it before. DRATS, FOILED AGAIN! is primarily a coming of age story. While there are great coming of age stories written with an MG-age protagonist (A WRINKLE IN TIME and THE GIVER, to name a few of my favorites), this particular coming of age story is about that scary, exciting, and confusing year between senior year of high school and the big wide world that awaits after graduation. That inner conflict of "Where will I live, and how will I make my mark on the world?" is absolutely central to Robert's struggle between good and evil (and Rupert's, in the companion novel coming soon).

Given this disconnect between my story and the traditional publishing scene, I guess the question really is, why did I wait so long to go it alone? The answer is that I have a lot of faith in the traditional publishing route. It's what I know, having worked with literary agents, authors, and editors on writing conferences and pitch contests at Operation Awesome. I have become very comfortable with my vision for my own success story, and it always involved, in my mind 1) get represented by awesome agent, 2) shop my novel to awesome editors at awesome publishing houses, 3) get picked up for a huge advance, and 4) celebrate!

My faith was strong in the traditional publishing route, and honestly, I still think it's a good idea to go that route in a lot of cases. It provides you with a team of people, some marketing resources, and often a nice little chunk of change in advance. But, and it took me a long time to accept this, DRATS, FOILED AGAIN! is just the type of story that agents and editors are hesitant to take on because of what they see as a marketing challenge. If it isn't straight-up middle grade and it isn't straight-up young adult, then what is it?

The characters are all teenagers. Some of them are middle grade age (Star and Shepherd, for instance), but the main characters are young adult age, almost adults. And unlike the very distinct differences between contemporary MG and YA, where young adults are dealing with very adult stuff and middle graders are dealing with bullying and fitting in, DRATS, FOILED AGAIN! has characters of all ages all dealing with the same big thing: the ongoing battle between good and evil. Because of its very playful MG tone and plot, and characters with a YA age, DRATS, FOILED AGAIN! actually has a broad crossover appeal. In fact, like Disney's Sky High, it could appeal to all the kids in the family as a readaloud (that's how we roll at my house), or kids 8-14 years old reading alone. When I queried it, I categorized it as middle grade, and that's still where I'd place it in the market.

BUT WHAT I'M REALLY EXCITED ABOUT with self-publishing is that you, the readers, get to decide! There isn't a big hullabaloo about which shelf to put it on, or just what type of cover art will express both the high stakes and the playful tone. And all that's left is just to read the story and, with any luck, fall deeply in love with its characters.

I hope you'll enjoy the twins, Robert and Rupert, their goofy insatiable dad, Famine Mouth, the mischievous tech genius Patsy Spendlove, and the heroes on the other side of the forest: Everest, Morphea, Star, and Trueblue. I hope you'll relate, whatever your age, to Robert's struggle to find where he belongs on that spectrum between good and evil, and to choose for himself where he wants to be.


(It will be available on Amazon Kindle and as a paperback.) 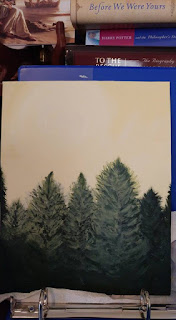 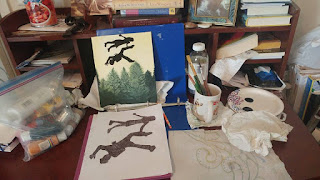