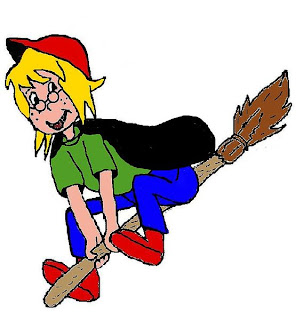 Got your attention with that title, huh? You know and I know that not all middle grade is like Harry Potter, but I wonder about the general population sometimes.

I wrote a middle grade novel this past year. It's around 40k words long, has goofy titles and the super villains all have special names, usually using alliteration and universal symbols.

It's about a thirteen-year-old boy with two living, co-habitat parents, and an evil twin brother who drives him nuts--not an eleven-year-old orphan forced to live with his aunt, uncle, and cousin in the Muggle world.

So why are my anonymous reviews coming back with, "It's like you're trying to copy Harry Potter but not as good," or "Great story! Reminds me of Harry Potter"?

What the heck, people.

First of all, not a fair comparison. No other middle grade novel has been as popular as Harry Potter... ever. Second of all, if you must compare one work to another, there are other middle grade novels in the world, certainly others that more aptly match what I've written. I don't claim it's entirely unique. After all, how unique could a super villain story be considered in the year two big-budget animated movies came out about super villains? (Despicable Me and Mega Mind)

I love Harry Potter, don't get me wrong. Have my tickets for Deathly Hallows: Part I bought and waiting. I'm a big fan.

But this is my own story. It's not about Harry. Not about wizards or wand lore or magical creatures of any kind.

Like many other middle grade novels, it is about kids solving their own problems. It's about goofy or wicked adults who pose problems for the kids, and it's about the complexities of being loyal to your family while simultaneously becoming your own person.

But that doesn't mean it's Harry Potter.

I feel like shouting from my rooftop, "READ MORE MIDDLE GRADE!"

For the benefit of anybody who stumbles across this post by Googling "harry potter", please leave your middle grade book recommendations in the comments. Let's start a new trend where middle grade is taken for what it is and not endlessly compared to one (albeit brilliant) series. :)

p.s. I wrote 6k words on my YA Urban Fantasy Nanowrimo WIP last night!! I'm not totally caught up, but halfway there. My word count stands at 15,500 now.

p.p.s. I'll start the recommendations: In keeping with the super power theme, I highly recommend POWERLESS by Matthew Cody. I'm currently reading THE SISTERS GRIMM by Michael Buckley and finding it absolutely delightful! There are classics like WHERE THE RED FERN GROWS by Wilson Rawls, and THE PHANTOM TOLLBOOTH by Norton Juster.
Brilliance by Katrina L. Lantz at 10:28 AM