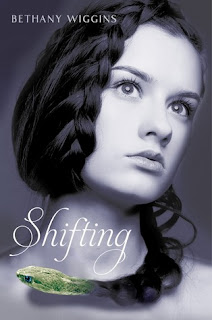 After bouncing from foster home to foster home, Magdalene Mae is transferred to what should be her last foster home in the tiny town of Silver City, New Mexico. Now that she's eighteen and has only a year left in high school, she's determined to stay out of trouble and just be normal. Agreeing to go to the prom with Bridger O'Connell is a good first step. Fitting in has never been her strong suit, but it's not for the reasons most people would expect-it all has to do with the deep secret that she is a shape shifter. But even in her new home danger lurks, waiting in the shadows to pounce. They are the Skinwalkers of Navajo legend, who have traded their souls to become the animal whose skin they wear-and Maggie is their next target.

Full of romance, mysticism, and intrigue, this dark take on Navajo legend will haunt readers to the final page.

You can read my Afterglow Review of this book here (that's a review written within the hour of finishing the book so you get my rawest reaction).

What's so unique about this book?
So there you go. My breakdown of what makes SHIFTING by Bethany Wiggins a unique YA paranormal.
Its book birthday was yesterday, so if you head out to your bookstore today, you should be able to go home with it!! Happy reading!
Brilliance by Katrina L. Lantz at 8:51 AM